As soon as I left Hatch I entered uncharted territory -- I'm now "exploring" parts of New Mexico that I've never been to before.  Maybe someday I can do it for real.

Last night I reached Victorio Peak in the San Andres Mountains.  According to Wikipedia, Victorio Peak was one of Chief Victorio's hideouts, and was the site of a battle in 1880 between Victorio's Apaches and the U.S. Army Ninth Cavalry "Buffalo Soldiers."  Additionally, gold prospector Milton "Doc" Noss claimed to have found hidden treasure inside the Mountains in the late 1930s.

Speaking of treasure, supposedly there's still a cache of gold inside of Victorio Peak, which was featured in not one, but two episodes of Unsolved Mysteries in 1989 and 1990.  How cool is that?  I love random mysteries (along with roadside attractions).  So far no gold has been recovered...as far as we know.  :)

On the way here and just a few miles outside of Hatch, I crossed the Rio Grande River.  Apparently this is what it would look like if I were actually standing on the bridge:

Shortly after crossing the river, I went through the town of Rincon, NM.  It's not a big town, just 271 residents according to the 2010 census.  It's located about 20 miles south of Spaceport America, the "World's First Purpose-Built commercial spaceport" and the official home of Virgin Galactic, billionaire Richard Branson's venture to take tourists into suborbital space.  According to Wikipedia, some Rincon residents have been skeptical that the spaceport will generate as many jobs in the long term as supporters claimed.  I guess I'm not surprised by that.

I've now walked 324 miles to Kim and Heidi's 387 (which for them also includes bike rides).  Once the weather cools down here in Tucson I might dust off the ol' Xtracycle and try to catch up. 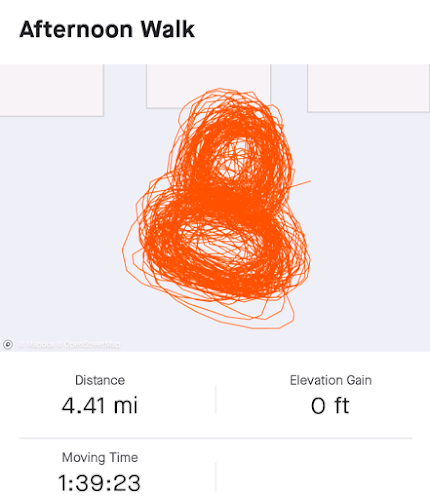 In the time of COVID

Hey. Wow.  Over six years since my last post.  Yeah, I'm not so great at this blogging thing. Oh well.  At the moment there are more important things to think about.  Like the fact the world has imploded due to COVID-19.  Maybe we can have a discussion about that in a future post, but I really doubt the we'll ever be the same.  I'm someone who loves to travel, but the idea of getting on a plane or being in enclosed or indoor spaces with other people right now -- or even in the near future -- just isn't going to happen. Which brings me to why I thought I'd try to start posting again.  From some of my previous posts, you may have gathered that I enjoy going to a gym to get my exercise on.  In the years and months preceding COVID, that involved boxing or kickboxing or lifting weights or doing FRC under the direction of Nic Holck .  But that's all changed. So I've had to change, too.  And what I've found now, in a strange turn of events, is that pacing figur