So where do you get your kicks?

Once again I seem to have fallen behind in documenting my virtual trek across the country to meet up with my friends Kim and Heidi in the time of COVID.  Time to catch up!

First, though, I'd like to acknowledge the Native lands that I've crossed since leaving Duran, New Mexico:

I encourage everyone to learn more about each of these Native peoples.

I'll also mention that last week not only did I finally reach 500 miles trekked in my backyard... 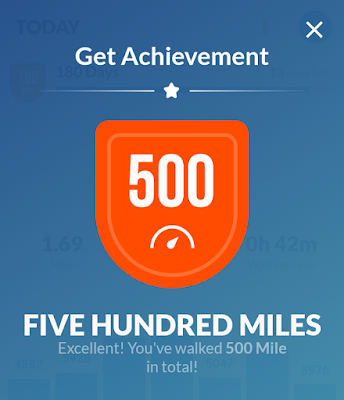 ...but also Heidi, Kim, and I officially reached the half-way point on our virtual trek toward each other, meaning collectively we've walked and biked 1,211 miles since May 20.  Yay, us!  Which means we're looking at at least another 5 months and 12 days (most likely longer) before we "meet" somewhere in the middle of the country.  Yay, us?

While Kim and Heidi have now covered five states and are making their way across Indianapolis, I continue to make my way diagonally across the state of New Mexico, which I virtually stepped into on July 4.  And everyone says everything's bigger in Texas!  I'm actually looking forward to getting to Texas, since I'll finally be in another state.  When will that be?  Oh, who knows...(sigh).

According to Wikipedia, Vaughn was established in the early 1900s and is named after Major George W. Vaughn, a civil engineer who was employed by the Santa Fe railroad. At the intersection of two major railroads, the town gained importance and built a large two-story depot, a roundhouse, and a Harvey House hotel.  Harvey House hotels have a pretty interesting history all their own, if you care to spend some time down that rabbit hole.

I did stumble across this poignant essay about one traveler's experience in Vaughn, which I very much enjoyed reading.

About 20 miles farther up Highway 54, I passed by Pastura, New Mexico.  Pastura is a small unincorporated community of 23 people, according to the 2010 census.  According to Wikipedia it was established in 1901 as a watering spot for steam trains on the Southern Pacific Railroad.  In 1903 the US Postal Service built a post office in Pastura in response to its growth, and in 1907, the Southern Pacific Railroad built a 142-mile wooden pipeline from the Sierra Blanca mountain range to Pastura.

But the small town began to decline when it was bypassed by Route 66, which passed 20 miles to the north.  When the steam locomotives were replaced by diesel locomotives in the 1940s, the railroad no longer needed to use Pastura as a watering stop, and the town declined even further. Today the area is a small farming community.

Speaking of Route 66 and another 20 miles to the north, I've now made it to and am walking along the iconic Mother Road.  In case you've missed this part of Americana for the past almost 100 years, Route 66 was one of the original highways in the U.S. Highway System.  US 66 was established on November 11, 1926, and became one of the most famous roads in the United States, originally running from Chicago, Illinois, through Missouri, Kansas, Oklahoma, Texas, New Mexico, and Arizona before ending in Santa Monica in Los Angeles County, California, covering a total of 2,448 miles.  It became a pop-cultural icon in such things as the Route 66 television series, which aired on CBS from 1960 to 1964, and my favorite, the hit song "(Get Your Kicks on) Route 66."

According to Wikipedia (again), US 66 served as a primary route for those who migrated west, especially during the Dust Bowl of the 1930s, and the road supported the economies of the communities through which it passed.  People doing business along the route became prosperous due to the growing popularity of the highway, and those same people later fought to keep the highway alive in the face of the growing threat of being bypassed by the new Interstate Highway System.

Eventually it succumbed, however, and US 66 was officially removed from the United States Highway System in 1985.  But some portions (like the one I'm currently "walking") have been communally designated a National Scenic Byway, returning the name to some maps.  Some parts are also being redeveloped into U.S. Bicycle Route 66, a part of the United States Bicycle Route System that was developed in the 2010s.  This bodes will for Heidi's, Kim's, and my combo walking-slash-bicycling adventure towards one another -- maybe we can even walk-slash-bike portions of our route in the non-virtual sense once it's safe to travel again.

Continuing on to Santa Rosa, this is another unexpected and interesting New Mexico town.  For instance, apparently it's designated as “The Scuba Diving Capital of the Southwest” due to the Blue Hole, an 81-foot-deep natural artesian spring that—at 62 degrees—allows for year-round scuba diving.  What?!  Scuba diving in New Mexico?!  So weird, and yet another place to I'll need to explore IRL when it's safe to do so again.

According to Wikipedia, Santa Rosa was not the largest settlement within the region at the turn of the 20th century.  But once US 66 was designated in 1926, the increase in traffic made the community a popular rest stop with motels and cafes.  Santa Rosa's stretch of Route 66 is part of film history: when John Steinbeck's classic 1939 American novel, The Grapes of Wrath, was made into a movie, director John Ford used Santa Rosa for the memorable train scene.  Tom Joad (Henry Fonda) watches a freight train steam over the Pecos River railroad bridge, into the sunset.

I guess this is what it would look like now...

Wow.  If anyone cares to check, you'll see the date I created this blog was a year ago.  Just look at all the blogging I've done in that time.  Pathetic. I had grand plans a year ago to use blogging as a creative outlet, keep in touch with friends and family, maybe meet some new people along the way.  And now here I am a year later, no posts to my name, and -- ironically -- no longer the Night Owl I used to be.  (If you knew me -- you know, because I'd been BLOGGING this past year -- you'd be shocked.  I still am.)  That's not to say I head to bed at 8 pm and get up at o'dark:30, but I'm also not staying up until 3 am on weekends just because I can.  A lot can change in a year. Part of my reluctance to start blogging was thinking that the first post (ahem ... this one) had to be perfect, articulate, funny, life-changing, holy-cow-I'm-gonna-follow-this-blog-because-it's-so-damn-good good.  No pressure there.  This, as we've seen, has turned in